It's Alive The Coming Convergence of Information, Biology, and Business 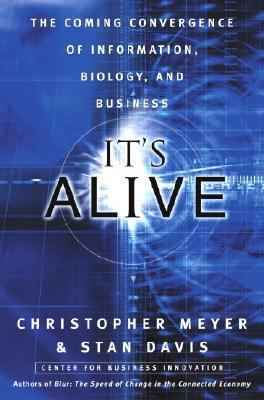 1 Economic Evolution: Learning from Life Cycles Imagine that it's 1971 in Palo Alto, California. You've wandered into a building at the Stanford Industrial Park, a nondescript place with cinder-block walls and rented furniture. The 3180 Porter Drive site is as plain and drab as the surface of the moon, and the guys working here seem to be living in their own private universe, speaking their own unique language. Someone's nattering on about the new "Intel 4004." Apparently, this new gadget he's talking about is called a "microprocessor." Someone else seems to think it's really great that this thing contains 2,250 transistors. They're both worked up over the fact that this "microprocessor" has an entire "CPU" on a single "chip." As an average person living in 1971, you have no idea what they're talking about. In this ugly building on Porter Drive, also known as the Xerox Palo Alto Research Center (PARC), the computer wonks are also talking about "operating systems" and "laser printing" and "icons." Soon they will be going on about the "mouse," "point and click," and the "graphical user interface"; eventually, "bandwidth" and "network protocols." In the early seventies, these terms were arcane jargon, but the words and the concepts they represent are as familiar to us now as "assembly line" and "mass production" were then. That's because the computer scientists at places like Xerox PARC and Bell Labs were, in fact, inventing the future--which is now our present--building the new economic engine that would overtake the industrial economy of the preceding 150 years. "Computer speak" is the lingua franca of the world we inhabit at the beginning of the twenty-first century. Today, in commercial laboratories with names like Maxygen, Diversa, and Nanosys, it's happening again. A new generation of scientists is inventing the next new world with its own novel nomenclature. Their terms of art, phrases such as "combinatorial chemistry," "gene shuffling," "high-throughput screening," and "MEMS" sound just as arcane to the average person now as computer terminology did in 1971. But pay attention. In the same way that researchers at PARC and Fairchild Semiconductor and Bell Labs created technology that established a new economy based on information, scientists in labs today are inventing a future based on molecular technologies. These include not just biotechnology but nanotechnology and materials science as well. Cargill Dow Polymers is growing polymers for plastics in corn plants. PPG Industries is making nano-scale coatings that enable windows to wash themselves in the rain. Bio-Rad Laboratories is attaching naked strands of DNA to gold nanospheres and injecting them into people with a nano-BB gun. A new "molecular economy" is on its way, while the information economy hasn't completely matured. As the information economy comes of age, a surprising thing is happening: Information systems are starting to take their cues from biological ones. Information is converging with biology, and business is following suit. At John Deere, for example, the art of breeding--as in thoroughbreds and show dogs--has been used to evolve a schedule for a highly complex factory that makes seed planters. Using a computer, the metal-benders create a few random schedules that express the sequence of planters to be built in a digital code made of zeros and ones. That code is a set of instructions, just as DNA carries a set of instructions, its "genetic code." Deere engineers evaluate each schedule with a simulator, which is like letting the horses grow up, and then racing them--in silico. The winning sequences are then mixed, put out to stud in an approach that is essentially sex for softMeyer, Chris is the author of 'It's Alive The Coming Convergence of Information, Biology, and Business', published 2003 under ISBN 9781400046416 and ISBN 1400046416.